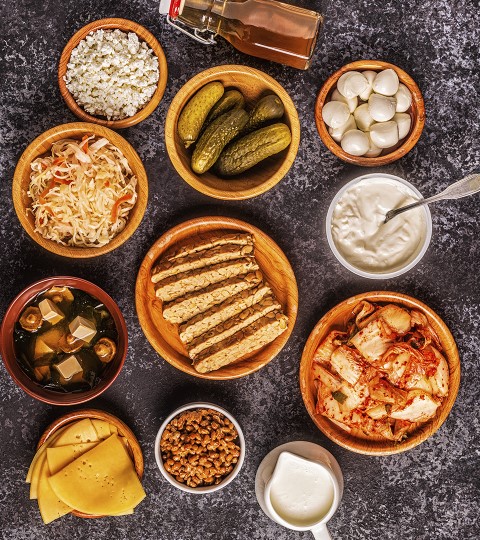 Stand aside salt, sugar, and spice, there is a new player in town, and thy name is bacteria.

Carme Plumed-Ferrer is on a mission to educate the world about the power of fermentation and bacteria. Few people realize it, but just about every type of food can be fermented. Hummus, soup, salad, meat, you name it. Healthy fermented foods don’t need to come only in the form of yoghurt and crazy-hot kimchi. Depending on the bacteria or raw material used, the fermentation process can be used to substitute artificial additives and the antibiotics used in animals. It can also be used to replace salt, sugar, and even the various spices in a product while adding a boost of nutrients. 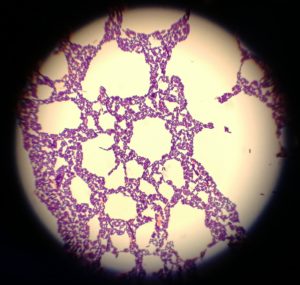 Probiotic Lactobacillus plantarum Q823: One of the many bacteria that can be used in fermenation to promote a healthy gut.

Sound too good to be true? That may simply be because you don’t have your PhD and 20 years of experience in the field of food and microbiology. Of course, not all fermented products are equally nutritious or can offer the magical win-win situation stated above. As Carme explains to me, it requires careful selection of the right raw ingredients, bacterium, and processes in order to achieve fermentation nirvana. More importantly, these products need to be scientifically tested and proven before promoting any grand health benefits. Products such as Kefir and Kombucha that you buy at the supermarket, for example, have no scientific evidence to back up their rumored health claims. For all we know, these products are just as healthy for us as alcohol.

And sorry everyone, in case you didn’t figure it out from all those bar-hopping socials and morning hangovers already, alcohol is NOT healthy for you just because it is fermented.

Products made with fermentation may also not be that healthy by the time they arrive on your grocery store shelves. “The bacteria have to be alive when you consume them,” Carme explains. This is why cheese, for example, while it is a traditionally fermented product, may not have such great health value since the bacteria on the cheese is often pasteurized and all of the healthy bacteria gone. 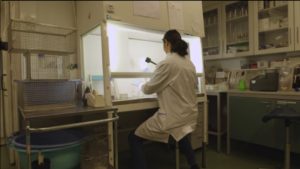 Just another day at the office. Carme developing some innovative fermented product

Originally from Spain, Carme came to Finland almost 20 years ago as a researcher for the University of Eastern Finland. She came here to do her PhD in Biotechnology and worked on creating a fermented pig feed product. She was always interested in metabolic processes and so as a result always worked with bacteria. So even after doing her PhD work in fermented pig feed, she worked on a lot of different projects involving food development and isolating various types of bacteria. She eventually started creating and experimenting with fermented drinks as a result.

Two to three years ago Carme’s university approached her about the idea of trying to create some commercial products based on her research. Carme was (and still is) a researcher at heart, but when her University offered her the opportunity to become an entrepreneur, she leapt at the chance. 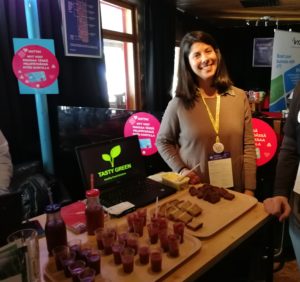 “I was developing products but they were not used at all,” she tells me. It was frustrating to not see the application of such great work in real life. At times she even attempted to “give” the products away to companies in order to continue their development and they still wouldn’t take it. In addition to that, she was reaching the point in her career where the only place to move next was into a professorship, and while she loved teaching, she wasn’t done working in the lab. So entrepreneurship was a natural stepping stone for her at this point.

Carme’s startup journey has been especially odd. While most startups start with an idea, found a company, and then continue developing a product to eventually sell to market, her journey was done a little bit in reverse. Before she even had a company, she already had a product being sold at every store in one of the biggest grocery chains in Finland. Her product, Mozumo, can be found at S-Group stores all over Finland.

As the story goes, Carme started developing and testing her first fermented quinoa drink after getting some funding from Business Finland’s TUTL program. Soon after, she found out about a program called Suomalainen Menestysresepti: A food competition in Finland that was hosted by S-Group. Out of over 100 applications, Carme’s product was one of 6 contestants to make it to the finals.

Little did Carme realize that this humble little food competition was about to be turned into a TV Show, and that she would have to have a fully commercialized product ready in 3 months. The speed seemed quite hectic for her, but as she states in her blog, she ultimately decided to stay: 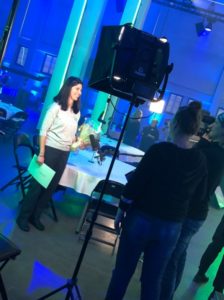 “When I applied to Suomalainen Menestysresepti, I honestly did not know what it was all about. I almost [withdrew] the application actually! I was not even a company yet then!! And I thought it was too early for my case. But because of my endless need to try new things, I didn’t”

It was a good thing she did stay. Not only did she get a crash course in food product development, branding, marketing, production and distribution, but also a lot of free marketing as a result of the TV show. She managed not only to develop her company while one the show, but simultaneously prepare her first food product for store shelves in the summer of 2019.

She also quickly realized that her main passion did not lie in branding, mass producing and scaling up food products, but specifically, in food product development. Which is why when she did finally open up her company Probitat, she decided the focus would be on helping other companies develop products which promote gut health through the use of healthy bacteria.

Since that time on Suomalainen Menestysresepti, she has been giving her business 200%. Everyday she is learning something new and having to learn it by herself. It can be hard sometimes, especially when she fails. It feels like she has to become a master of everything in a day, and she doesn’t have time to take a course in every subject. However, it is all a part of the process of learning by doing. Every time she fails, she simply dusts herself off and starts again. “If I waited until I knew everything before starting a company, I would need a PhD in 10 different fields, but there is no time,” she explains to me.

Most recently she has developed a super tasty plant-based cheese that is not only nutritious but low in fats and sodium. Her secret weapon? Bacteria, of course. She’s looking right now for a partner company to take the product to market.

Her company, Probitat, is also one of the top 10 startups to be chosen for the EIT FAN Helsinki accelerator program. Doing the program 100% remotely has been a challenge since she would love to meet her fellow startups, but so far she is loving the program. They have done a lot of work to help tailor the program to each startup’s needs, and as always, Carme is learning a lot.

The networking has also been fantastic. A month into the program the accelerator hub has already introduced her to some big partners that she never would have gotten as a young startup. Partners, in fact, that she had been trying to get for 3 years without any luck. In the future, she hopes to get some sound advice on how to showcase Probitat’s unique selling points, refining the business model, and how to better explain to customers the importance of identifying and consuming fermented products with scientifically-proven health benefits.

Making the journey from researcher to entrepreneur has been a whirlwind ride for Carme. Everyday is a learning experience, and she doesn’t always have the time to carefully plan and think through all of the options available to her: she just has to make a decision and go with it. Has she regretted becoming an entrepreneur though? Not a chance.

To learn more about Probitat and the EIT FAN Helsinki program, visit https://probitat.eu and https://www.eitfan.eu/helsinki

Together with our partners at the Ministry of Agriculture and Forestry and the Finnish Cereal Committee, Food and Beyond has set out to build a shared platform for discussion and development of the plant protein… Read more » 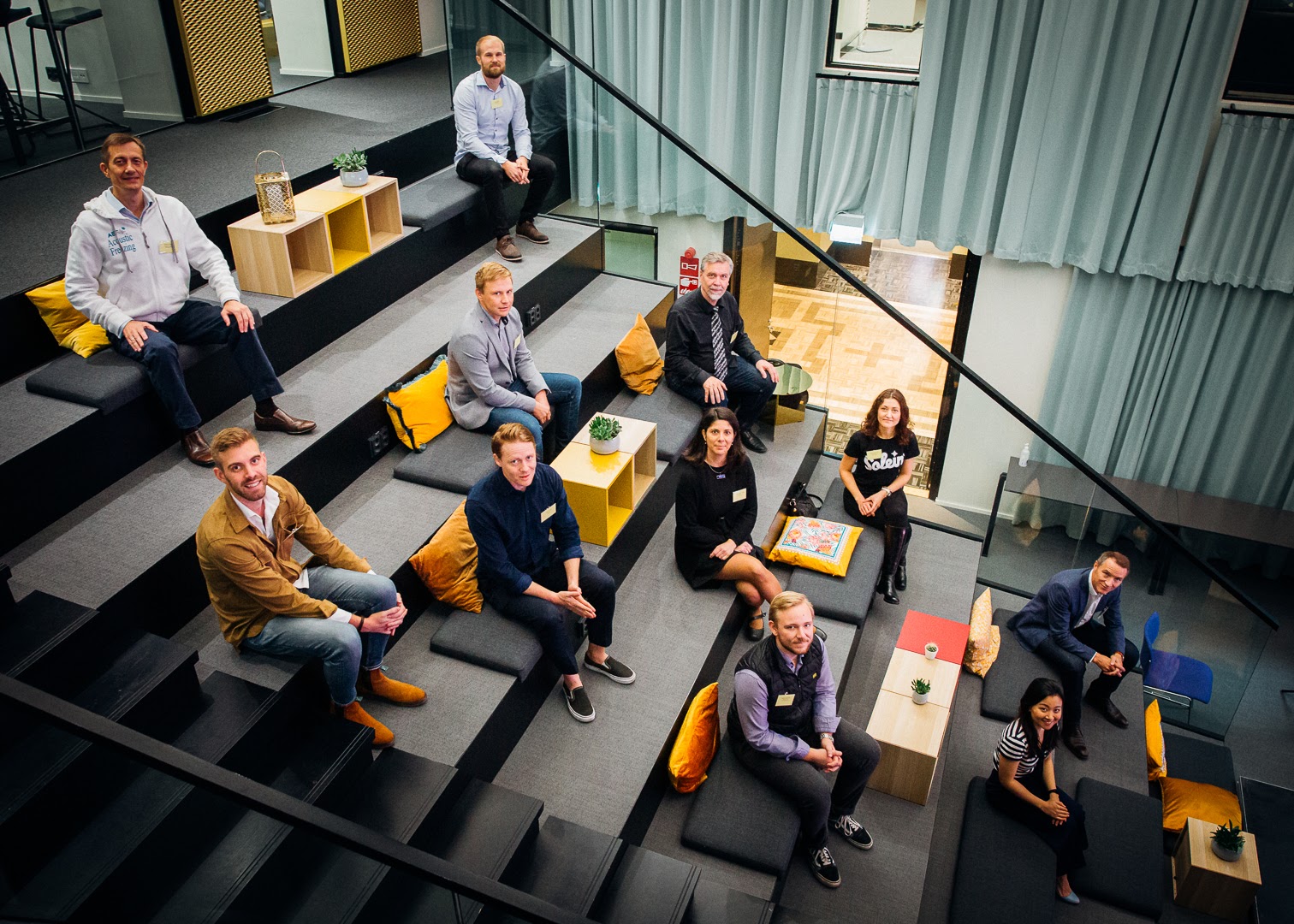 First Meetings, Final Pitches, but certainly not Final Farewells It was an emotional moment last week as the startups, mentors, partners, and organizers of the first EIT FAN Helsinki program met each other for the… Read more »